A small example of why Microsoft continues to fail 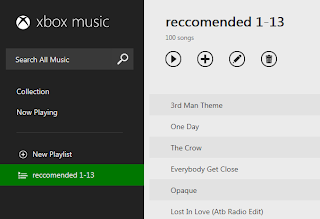 Microsoft, in a fit of pique apparently, did away with branding their music under the Zune name and folded it up into the XBOX brand, creating a brand new site for those with an Xbox Music (AKA Zune) subscription. I can now stream things from their catalog at the "lovely" yet less functional site http://music.xbox.com .   Eager to see what new capabilities I have I logged into the site.  Whoops.  There's something subtly wrong here.  What could it be? OH look - they misspelled the word recommended as Reccomended.  That may SEEM trivial but when it's in big bold letters at the top of the screen it is highly annoying to someone who loves quality in their products.  Ok, so I posted a bug report about it.  I put a post on their Facebook page.  I engaged them with Twitter.  What has been the response?  It's now 5 months later (November, 2013) and they still haven't fixed it.  It might seem trivial but this is software stuff that should have been caught in initial QA, and certainly never released into a live product.  And it's so easy to fix it's not even funny.  It's a spelling error for goodness sake - just go in with your editor and update the page, and push "publish".  It's not rocket science.

That's just the latest example but I can cite probably 20 examples over the past year that are enough to drive a reseller or user of their products crazy - from administrative pages that don't let you do simple tasks, to crazy wizards that leave you astray, help files that don't match the actual information on the site, and other crazy issues.  Just recently I tried to get my silver competency, ordered training materials, started getting my guys all trained up only to go to register for the SINGLE REQUIRED TEST for the competency I was pursuing and discover it has been discontinued. I can't sign up for it and I have 2 months to attain my competency or they take away my ability to resell their product.  Maybe I will just let them and move the several hundred mailboxes I have under management to Gmail, despite it's weaknesses.  This is so wearing and such a waste of my time.  People complain about signing up on www.healthcare.gov but I guarantee you it's probably less frustrating than dealing with Microsoft.
Posted by Childish Democrat at 2:14 PM

Other blog pages I edit

Here is a sampling of blog content from other pages I edit, including: