The one shoe story contest 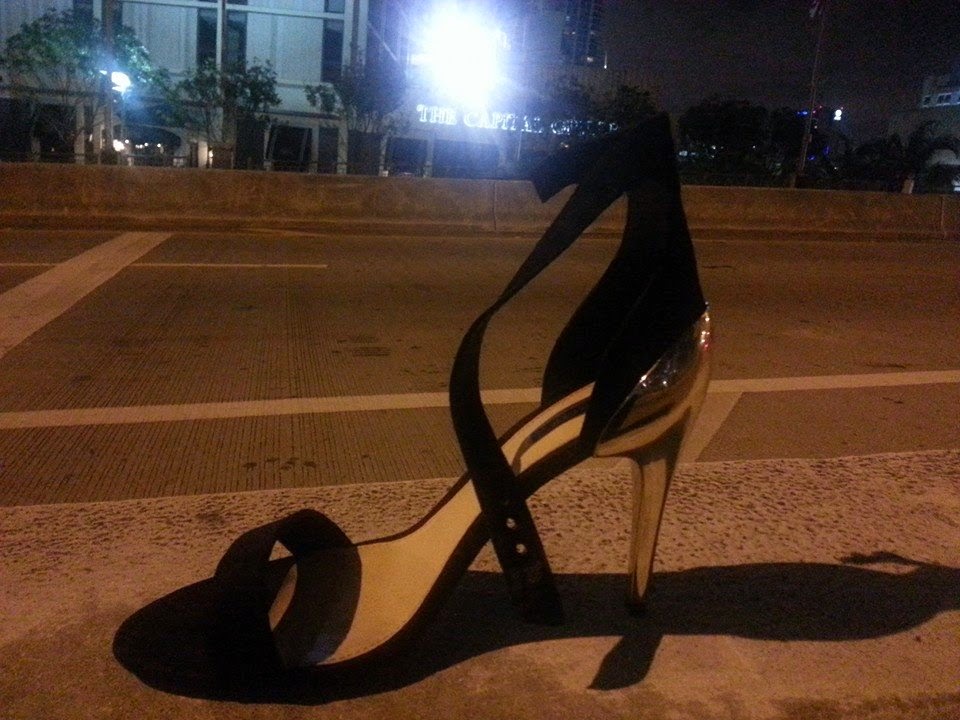 While traveling in downtown Miami I came cross this single shoe - in nearly pristine condition, lying alongside Brickel Avenue near Club Fifty - a high end resort ultra club. I set the shoe on the median and took this picture. I then challenged my facebook friends to write a 1000 word story involving the shoe. The results are shown below and numbered. Each story is submitted by one of my facebook friends, and each story is numbered, but the author is not indicated, and they are restricted from lobbying for or announcing which one is theirs. Starting NOW we will have a judging, run by my facebook friends, to see whose story wins, and they will receive an appropriate prize which I will decide on.

Here are the entries, in no particular order:

Number One:
He looked at the shoe.
The shoe looked at him.
It was a nice shoe. No, "nice" did not cover it. It was an awesome shoe. A fucking awesome shoe. The kind of shoe where the fucking would be awesome. Yeah, that was more like it.
"Hi."
"-----?"
"I said, 'hi!'"
"---!?!"
"How much have you had to drink?"
"Clearly either too much or not enough. I should sit down. No. Wait. I'm already sitting down. In the parking lot."
"Yes."
"I'm sitting down. In the parking lot. At . . ." He fumbled for his phone. " . . . 2 o'clock in the morning."
"Yes."
"Hey, Jason! You need help, man?"
Jason swiveled around to see the group he'd been with just coming out of the club.
"No! No. I'm fine. Just taking a breather."
"Okay. Catch you tomorrow!"
Jason watched them move off down the block.
"Typical."
Jason turned back to the shoe. The really great shoe. Narrow toed. Slender strapped. Black. And oh so very spiked. He licked his lips.
"Some friends you have there."
"What? Oh, they're not really my friends. Just some people I hang out with."
"Exactly. The kind of people who'll leave you, drunk, alone in a parking lot at 2:30 in the morning."
"2"
"Nope. Time passes when you're having fun. Check your phone."
He checked. It was 2:30.
"You need new friends, Jason. Hell, you need friends, period."
"Hey! I've got friends!"
"Check the phone, Jason. Is there anyone in there who would come get in the middle of the night?"
He looked at the phone in his hand again.
"That's not the point! Where the hell do you get off saying shit like this to me?!"
"I was once you, Jason. A friendless drunk with a shoe fetish."
"Okay. This is getting weird."
"Now it's getting weird? Only now? You're the one talking to a shoe!"
But what a shoe!
"Listen up! Focus, Jason. Focus! Reincarnation is real. And I came back as the thing I loved most."
"You are shitting me. And, what? Wait, you're a guy?"
"Open your mind, Jason. If I'm a talking shoe, all sorts of things are possible!"
"So, like, if you came back as a shoe, where's your mate?"
"I don't have one."
"No way. Shoes come in pairs. We all know that."
"Karma is a bitch, Jason. I loved fucking the women with the shoes more than I loved the women. Now, here I am. Talking to you."
"Oh, hey, like Clarence the angel in . . . uh, that movie! Thing."
"Jason, you make me cringe, but essentially, yes. Only I don't get wings."
"Dude, that sucks! No wings?"
"Nope. But there might be a reward for me in it somewhere. Did you notice I'm sitting by your car?"
"Uh, yeah! Yeah, I did. I was going to my car when I saw you. I was going home. Work tomorrow. Uh, today."
"That's right. You were going to drive home. Very drunk."
"Hey! I was fine! I could drive!"
"Uh, huh. Check your phone, Jason. What time is it?"
"Shit!! It's four fucking a.m.! I am so screwed! I get up in two hours!"
"Yeah. But you will get up. Out of your own bed. . . . Jason?"
"What?"
"Take me home."

Number TWO:
"Did you lose a shoe last night?"
"Uh, huh. How did you know?"
"Janice, I know you. You 'lose' a shoe every time we go out!"
Janice finally looked up where her friend hung over the cubicle wall.  She took another sip of coffee.
"I have such bad luck hanging onto my shoes. I party, I lose a shoe." She shrugged.
Marielle rolled her eyes. "Did this one have an ankle strap?"
"Maybe."
"Right. I am so onto you! Just how many times did you watch that Disney movie as a kid?"
"I don't know. Who keeps track?"
"And that picture on your desk? Of you in the Rogers and Hammerstein musical?"
"I like community theater!"
"Uh, huh. Do you really think you're being sneaky? I've seen you! Carefully placing a shoe - excuse me - displaying a shoe, upright, under a street lamp. Every time we're calling it a night and heading for home! This is Miami Beach, not Fairy Tale Village! Do you really think the finder of the shoe could find you, even if he wanted to?"
Janice shrugged again, smiling a bit. "So. Do you want to go shopping at lunch? I need more shoes."
"Count me in."

Clarice walked briskly down the sidewalk, her heels clicking as she moved and throwing a barrage of light from the shiny back end of them. Her mind spun through the situation she found herself in, the Agency had certainly sent her to less desirable locations before. Alaska had been a royal bitch, but apparently that was where the last of the endangered pygmy albino grey seals were seen. A curse flew out of her lips as she thought about the company she worked for. Alaska? For a seal normally found around Ireland? At least if she had gone there she'd have been able to keep herself happy with a large drink while she worked, and probably for cheaper as well. $8 for a Corona? Were these people mad?

Clearly the city wasn't for her.

"Young and beautiful or old and rich... No place for those of us just trying to make an honest day's work..." She muttered, turning a corner.

A glance at her watch showed 19:53 in a dull blue light. Seven minutes left, max, and she'd be off shift for the next week. The damn animal would be someone else's problem and she could enjoy the time remaining before she got shipped off to some other part of the planet in another mad quest. Just walk another block or so and pray the tracker didn't connect with- shit.

The watch that was only moments ago filling her with hope just jumped to one of the possessions she would least like to have as it began to buzz wildly. With a quick button click it fell silent again.
She frowned and ran a hand through her long red hair, discretely bumping the edge of her glasses with a finger and eliciting a brief, high pitch whine. It might be a bug after all, it was a new system they were testing out.

"John, did you get that?" She murmured softly, knowing the microphone would pick it up. "I got a hit but I don't see anything around here."

The sound of Cheeto-dust covered hands being rubbed clean together caused her left eye to twitch, "Yeah, I got something Clara. Heading your way, only reading about ten miles an hour but accelerating. They'll be doing about fifty when they hit your location, maybe a minute thirty from now. Anything around you can use to chase them? Your odds of stopping them on foot are nil."
"No, the boss told me not to spend the whole shift in the car again. Said I was being an idiot and making myself looks suspicious. Who's the idiot now? See if you can get into one of those street cameras, I'm going to try and slow them down. Maybe we'll get lucky with a look at the plate, then it'll be intel's job and I can have my vacation."

A dull grunt was the only confirmation that she got, followed by the squeak of a rolling chair and the noisy click of someone hammering on a computer keyboard for all they were worth. She slipped her heels off and sighed at the feeling of cool pavement on her feet. She freed a kunai from one of her heels and whipped the now useless footwear to the side, smiling as it bounced off a wall and clattered into a can. She reached down for the second as a voice came back over the speaker set in her ear.
"Shit, I lied. Fifteen seconds, they're armed, get down!"

With a mumbled prayer she dove against a doorway and held the knife steady, listening as the roaring of an engine got louder
.
"You see me, John? Count me down, if we time it right I might be able to take out a tire. Won't stop them here, but it'll slow them down enough for you to get a good shot of the car if you keep tracking them."

"Got it, ten seconds."
"Nine."
"Eight."
"Seven."
Clarice drew her arm back and loosened her grip on the weapon, preparing to throw.
"Six."
"Five."
The sound of a bag rustling and chewing suddenly came over the speakers, causing her to grit her teeth.
"Damnit, John, stop stuffing your face for just a few seconds!"
"Hey, I'm running on a fifteen hour shift here! A man needs to keep up his energy! They should have laws against this much work!"
"Well maybe if you would haul yourself to the gym instead of-"
"TwoOne."

Clarice's arm snapped forward and the blade left her fingers at a massive speed. There was a loud pop and the black car lurched to the side just moments after entering her field of vision before righting itself and tearing off, throwing up rubber and sparks behind it.

"Nice! Oh man, if I could show my Call of Duty buddies that they'd be-"

She stepped off the threshold of the door she was pressed against and ran out into the street, grabbing up all the spare tire scraps and dumping them into another garbage bin.

"Yeah, you got a nice hit. They'll get maybe another three miles max before they need to change out vehicles, that tire is gone. And that's if they want to leave scorch marks the whole way behind them. Take your vacation kid, you did a nice job today."

"I'm not a kid." She flicked her glasses, knowing the noise would nearly blow out the speakers on the receiving side.

Breaking into a jog, she followed the sound of music, never realizing that she completely forgot to pick up the one heel left back on the ground.

"Well, I might not be young and beautiful or old and rich, but I can pool dance with the best of them..."
VOTE NOW AT ONE SHOE STORY - you must have a facebook account to vote.
Posted by Childish Democrat at 10:35 PM

Other blog pages I edit

Here is a sampling of blog content from other pages I edit, including: